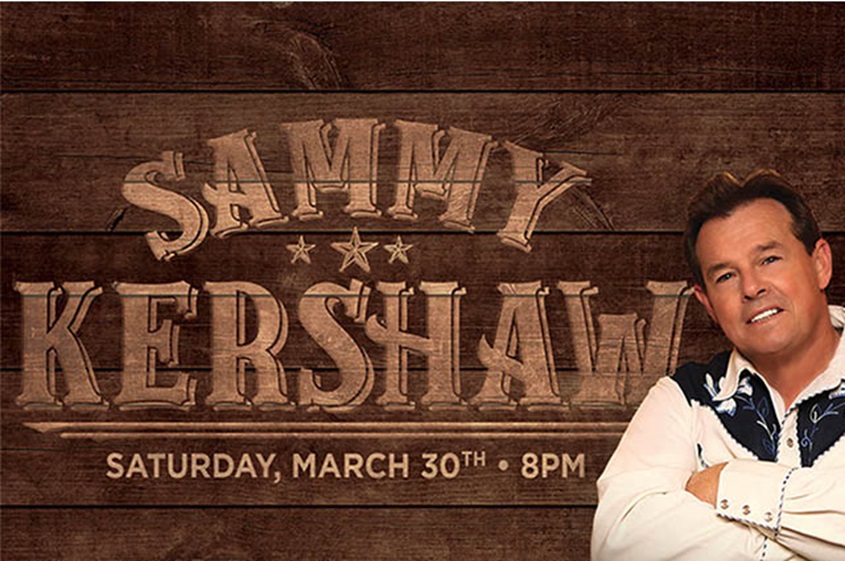 ATMORE, Ala. – (02/01/2019) Sammy Kershaw will take the Wind Creek Casino & Hotel Atmore (WCA) Amphitheater stage on March 30, 2019 at 8pm. Tickets are available for purchase through ticketmaster.com or Essentials gift shop inside the casino.
Since his debut on the music scene in the early 90’s, Kershaw has remained one of the most consistent power hitters in country music—both with a chain of major hit records and sell-out touring schedules.

Sammy Kershaw’s plan for country music is re-claiming its roots and recapturing the spirit that made it great. “Country music is not a formula…it’s a music with its own soul…and I’m all about saving that soul!” Kershaw’s current album "Honky Tonk Boots" promises to be a much-anticipated first step in that plan of salvation.

For Kershaw’s newest project, the singer’s soulful sound and Cajun vocal kick once again join with the genius of producer Buddy Cannon. Sammy’s vibe about his latest studio venture has all the earmarks of a proud father talking about his new arrival “In music, everything is timing. I knew when we were in the studio working on the new album that we had something radio and fans are ready for…the feel of the album is a return to the kind of country music I, and a lot of other people, have missed.” Powerful words from a man who has picked, written, and sung many hits.

Often referred to as the “heir apparent” to the legendary ‘voice’ himself—George Jones—Sammy Kershaw helped make the ‘90’s a shining decade for country music. It’s a comparison not lost on Sammy, who grew up in the Cajun country of Louisiana on a diet of crawfish and country music. The oldest of four children, the tragic loss of his father, matured him even faster than the clubs and honky tonks he was performing in at 12 years old.

He speaks openly today of years spent battling substance abuse and addictions. “It’s not a period of my life I’m proud of but I do talk about it to encourage kids not to follow in my footsteps,” Kershaw recently noted. Helping others is a subject close to the heart that beats within what might often appear to be a tough, macho exterior. Sammy Kershaw is, in fact, a softie when the subject turns to kids. If proof were needed it stands in his hometown of Kaplan, Louisiana. There Sammy has established the Sammy Kershaw Foundation. Its outreach has extended through donations so far of more than 2 million dollars in aid to children and child related charities. With projects that extend from granting wishes through “Make A Wish Foundation” to establishing camps for crippled children, the foundation exists to fulfill Sammy’s simple goal of improving the lives of children.

In the course of breaking into the ranks of stardom in country music, Sammy Kershaw has made contributions to more than just the charts. His platinum albums were propelled into the records books by hits such as “She Don’t Know She’s Beautiful,” “I Can’t Reach Her Anymore,” “National Working Woman’s Holiday,” “Love Of My Life,” “Cadillac Style,” “Don’t Go Near The Water,” “Haunted Heart,”…and many other milestones.
About Wind Creek Hospitality